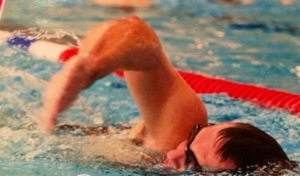 One tactic used in all swimming training from club squads to the Olympics is the concept of whole-part-whole: to develop the stroke, either to improve skills or strength, you break the stroke into parts. The simplest expression of this is arms only or legs only followed by the full stroke. This is repeated over different distances and whether an aerobic or anaerobic set, against different turn around or repeat times. This is finessed with drills, so taking on of the four competive strokes – frontcrawl backcrawl, breasstroke and butterfly – what might we see? This morning’s Master’s set had the following drills: short doggie laddle, long doggie paddle, carchup, touchfloat and closed fist. Each was a 50m drill followed by 50m full stroke. Later we did some arms only sets over 100m against the clock. And we swam sme backstroke and breaststroke for slme variety before some short full strokes sprints on Frontcrawl and a swim down.

How might this translate into a training session or e-learning module? To start with the module, like a set, would need to change every week, so that there is progression in the challenges set, the skills in technique to demonstrate and even the times to rest or turn around a swim.

There would need to be variety too, which typically means emphasis on a different stroke but inlcudes having a different coach, swimming in a different lane and having different swimmers in the lane with you.

I rarely see such variety or such progressive, long term, planned in progression in learning and development, while many e-learning modules are no better than the leaflet or linear video they replace – they are fixed.

Does this work? How do you reversion content so that it gets progrossively more challenging at a pace that puts the individual learning just beyond being able to d the thing with ease? Effort matters, easy learning isn’t learning, just as a stroll in the park isn’t a training run.