Staggered. The masters in the club hold World, European and National swimming records. These successes and the numbers of masters swimmers are in part what make ‘the Marlins’ such a success.

This is only my second day poolside in three weeks, indeed only my second day in ten months having taken a break from swimming coaching, something that became an important part of my week nearly five years ago as I climbed the ASA qualifications: I now have 10/11 modules successfully completed but will need six months I would have thought to get back up to speed with the complexities of developing young athletes to County & Regional standards.

I receive an official club polo shirt. I have a couple more somewhere, along with a Really Useful Box (they are) containing folders, reference books and qualifications.

Saturday a.m I teach (in future weeks I may also have an early morning swim). There have been days when I have taught or coached six times a week,sometimes clocking up 16 or more hours of coaching, teaching and preparation.

Our club is the largest in the South East Region (a vast area that takes in the entire Southern and South East chunk of England excluding London. We have over 1000 active members. Of these, if I remember the figures (I have taken the club successfully through Swim 21 Accreditation three or four times now) some 200 are Masters swimmers, not quite 100 in competitive squads, but an easy figure to work with, leaving another 500 in teaching groups and 150 in training groups, with another 50 playing water-polo. We swim at four venues, with Saturday mornings at Burgess Hill and Haywards Heath ours exclusively.

Today I conveniently find myself with the same grade of swimmer for the three 3/4 hour sessions that start at 9.15 a.m. after three hours of masters. There is a qualified level 2 ASA assigned to each of five lanes with a sixth ‘behind the group’ taking one of the groups new to club swimming who are still on widths.

Historically I have kept a meticulous electronic record of ‘my’ swimmers, using FileamakerPro to collate all manner of things regarding the swimmer’s progress, strengths, weaknesses and times; a system that became more detailed at the competitive level as i helped nurture, develop and direct talent into a skills group then mini-squad.

I feel I have a good eye for potential, which is reflected in a natural fluidity in the water, a sense of eagerness and skill in and underwater that is best described as ‘fish-like’ as well as an eagerness to listen, learn and apply training methods (evidenced of course by competitive times).

To say I am yet to get into the swing of things is an exaggeration: I remember my registration and skills charts and flip-flips (used to be deck wellies, hence the nickname ‘the Welly boot man’) but forget a bottle of water, whistle and stop watch. I don’t even have my Kindle that I’ve taken to use as diagrams from ‘The Swimming Drill Book’ are brilliantly illustrative of what I want the swimmers to do. With squads I used a digital camera, typically to record and monitor strokes into and out of the turn.

Today, after a warm-up and an unscheduled Front Crawl time trial we are working on Breaststroke and Breaststroke turns.

Whilst you teach the group, you support, observe and address strengths and weaknesses of the individual. Glancing at the swimmer to take in their overall body position, head position and action, shoulders, position of torso and legs in the water, becomes second nature. This applies from the moment they push off and includes any turn and how they finish. With each stroke you are always looking at: Body, Legs, Arms, Breathing and Timing and placing the swimmer on some kind of continuum of development, judging what they clearly can do which warrants them being in the group, wondering why they are in the group if they cannot (there are many justifiable reasons for this) and often wondering why they aren’t a group or more ahead, indeed, wishing they would take a second swim in the week or join our skills group for developing talent.

In my first group an eight and nine year old stand out, the younger swimmer I took for a few months over year ago: she is sharp and enthusiastic. A high elbow and steady kick the tumble turn and the dolphin kick through the transition are all there. The nine year old is new to the club this term and shows the gymnastic grace of someone who has been swimming from an early age. The eleven year old would ideally be several grades higher by now. As the Principal Teacher put it to me, and we have said before, “we need them younger and to come with us with more of the basics in place’.

I make a point of using the swimmer’s name repeatedly so that I know that all after their first session: this becomes a challenge if I see more than sixty swimmers a week – there was a time I might have been seeing over 200 different swimmers.

We asses the swimmers as we go along: I like to be sure they can do a thing on three different occasions across the term and will put emphasis on fixing problems early in an attempt to get most through.

Of the 13 swimmers I take today only 1 swims twice a week. At this age this makes a huge difference to their progress, they are of course far more likely to pass through the grade and at times a swimmer is considered competent enough to jump a grade. This one answer to fast tracking the swimmers as they arrive at the club; the challenge is always the dedication of the parents or a parent to bring their child along.

The session after the 50m time trial (most have a dive, some a reasonable transition with some even doing a tumble turn) may have started with a bit of fun, either ‘otter’ in which they mimic a sea-otter collecting oysters from the seabed and cracking them open, to bouncing the length of the pool in a streamlined position. Then, with breaststroke a length or two to asses, then whole-part-whole with legs the part, first on the back, possibly with two floats, then on the front working into the drill 2 kicks 1 arm pull (2K1P). Invariably there are problems a) leg kick not symmetrical and b) arms pulling done to the side to the waist. I address this through demonstration, if necessary on the poolside and occasionally with a wiggle under the arms. The transition is taught in three parts: the 3 second glide out, the 2 second glide arms at the side after the ‘key-hole’ action, then sneaking the arms up and off.

A BR sprint over 25m

And some skills/fun: handstand, summersault and mushroom float. 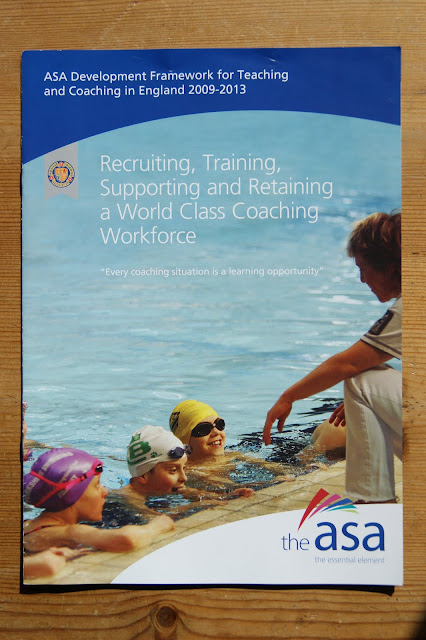 Through the Institute of Swimming (IoS) you can find courses near-by to suit you. 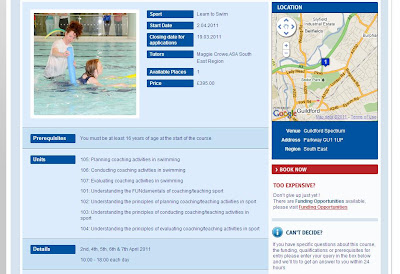